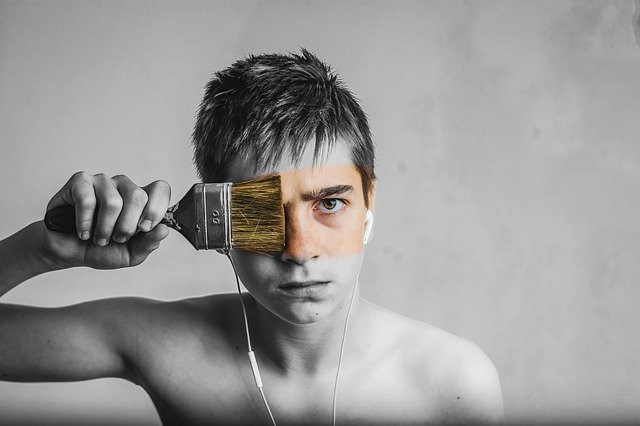 I could only describe that feeling as a dark, lurching beast that clawed at me only when it chose to. Even after all that time, I never grew used to its dwelling within me, or the urges it beset.

The flesh of all who surrounded me hummed with a beckon. A tease. As if whatever looming force that placed this burden upon me wished to test my threshold. And although I never quite grew used to the feeling, coping was easy. An always seeping cut hid on my finger, behind the veil of a small bandage. Whenever a sight stimulated my beast, and the urge swelled, I took to the cut with sucking lips. I’d become used to my own blood’s taste. Its morbid greeting with my tongue soothed any urge to make a rash decision.

In my new workplace, I’d become accustomed with two women, both of whom I found to be quite tender. They suspected nothing ulterior about me or my countenance, in fact, they only wished to find out more about me. I desperately tried to ignore them, but it seemed they couldn’t keep their mundane dialogue away from my ear.

And mundane it may have been. But their loquacious nature—oblivious and indiscriminate—dripped with the promise of luscious flesh. They couldn’t’ve been older than thirty, and that such age awakened my beast with dripping lust for a taste.

In that office, I was sure to withdraw into my shadowy corner as often as I could. If my desk were a mess, a trace of my beast may arise amidst the clutter through some blip of writing or other conspicuous trail. Thus, my desk remained tidy.

My two coworkers—Gene and Katherine—and I sat amongst each other in that office, awaiting the inkling of information to trickle in. Both of them had submitted to another prestigious art magazine, and the two week callback period begun today. Even though both of them conversed about this and that, it was the overarching drape that hung over them.

I hadn’t seen their work before, as I hadn’t been inclined to ask, or even draw near. But listening was a skill I had long since mastered and picking apart the choice of words in which they spoke also gave me a sense of their underlying thoughts or fears.

“Look at this person’s piece,” Katherine said, her pen tapping upon her monitor. “It’s very Frankenthaler to me: the way these hues seep into the paper.”

Gene nodded, peering over her shoulder, and drumming upon her latte. “Those colors are muddier than a Frankenthaler, though,” she said, biting her red lip.

I had to look away, back at my screen, where I peered into a submitted piece. An abstraction—lots of red and black in it. I scrolled to another. An oil portrait—underlying pink hues in the cheeks.

A landscape of an active volcano.

I sprung to my feet, gathering my things in a messy shuffle. My journal was the main concern, which I secured as the bottom-most item within my satchel. The following steps I took echoed like ricocheting bullets, and Gene and Kathy’s eyes shot right to me, as well as the remainder of my coworkers. All the angst of waiting for their respective emails or calls fell away.

The office was a drab place, and the outside hallway screamed with even shrewder dullness. Those mustard-yellow lights flickered, and the walls of brown faux-brick reminded me of their imperfections with a taunting whisper. The floors still needed to be swept.

My body was opening up.

That night, in the confines of my apartment, that cut hardly left my mouth. For, those two fogged my very conscious. Normally, I would be able to contain such erratic outbursts, but their skin—and all that lay underneath—caused my thirst to go beyond the cut on my finger. My teeth cried out to me, begging to sink into the tenderness of human flesh.

What little clutter sat upon my floor—a pair of underwear, some stray socks—swiftly got withdrawn. I made my bed, ripping the uncleansed sheets off in a roaring frenzy and replacing them with new, white ones. The floors called for my sweeping, mopping, and disinfecting.

Every trace of a blemish needed to be removed.

The scent of bleach reminded me of my days as a child, looming around my mother as she cleaned every crevasse and corner of each room. When she got down on her hands and knees and scrubbed away at each polishable surface with a wipe or sponge or gloved finger. But of course, those images quickly brought me back to how I left her.

How confused she looked when I told her, “Mother, I—”

A knock came about on my door.

That sound would usually spiral me into a haze of other knocks. The knocks of that man my mother eventually married. How harsh they were, and what his fist eventually found the capability of doing.

But this knock greeted my door gingerly.

I could sense each individual knuckle as it hit the wood and whispered a coax for me to answer. And my ensuing steps were languid, heel-first, and groaning. Perhaps, if I knew the person on the other side, I could smell their skin prior to showing my face. I could possibly identify them as a means of preparation.

But as my timid hand approached the knob, I was met with no such aroma. Only that of potent perfume. And as I pulled the door open with a squeal, my throat closed. For, the sight of Gene, clothed in a red, knee-length dress assaulted my senses. And those efforts to thwart my urges or lust betrayed me into futility.

I swallowed my own saliva. “How did you—”

“Katherine told me you lived in this building.”

“I never told Katherine that.”

Everything pulsated. Yes, my teeth ached, my fingers urged me to act, and my tongue slithered about my mouth. But somehow, it was my mind that usurped it all.

“And most artists live in this wing, so I’ve come to find.”

She’d come to find? Why did she visit this place so often? Had someone else placed their lips upon—“Come in,” I said, surprisingly softly.

And when she walked into my dwelling, her glossy heels clacked against the wood of the floor. “Knocking on your door was just a lucky guess.”

Knocking on my door was an unlucky fate. And when I closed it, a sullen, nightmarish declaration sonorously sounded within me: the call of my beast demanding war.

The evening carried on as if I’d invited her over—as if this whole scenario, from the top to the bottom, was my very own idea. I poured her a glass of white wine, to which she complimented its taste. And my eyes tried desperately to avoid her supple skin, whispered blush, or red lips. The only thing of hers I stared upon were her cool, blue eyes.

But it was only as the night progressed that I realized my grossly inept fault. The wine buzzed her insides and riled her up, eliciting more than I would’ve liked to hear. “I’ve been fascinated with you,” she told me. “I’ve been dying to see your work.”

“Who told you I paint?” I asked, which was something I should’ve inquired earlier.

“I just assumed.” She crossed her legs upon the couch where we sat—one cushion a mediator between us. “Most of the people in this wing do, as I said earlier.”

“Well, it’s probably not the kind of stuff you’d be into.” I’d poured wine for myself too, and at this moment I forgot about it until I tried to make a fist.

“Oh please,” she said. “If you got hired at Burton then you must have a decent portfolio.” Gene looked about the walls with a survey, inspecting their hangings. “Are any of these yours?” she said, gesturing toward the oiled canvases.

I shook my head. “They’re mostly from friends of mine.”

“So, you’re secretive, even in your own home?”

I was secretive in my own head, forget about being so in my apartment. “I like my art to go where I choose.”

“You don’t wish for fame?” She snickered. “Very interesting.”

“I don’t find it all that alluring.” I adjusted myself on the couch, even teasing my lips with the glass of wine. “Having myself exposed like that.”

The hope of seeing my work fell away from her visage. Gleaming turned to receding—desperation to change the subject to something else.

I led her to my studio, not even daring to graze her skin with mine. For, the safety of the couch was no more. I could no longer place my hopes into stillness—we were moving, ungracefully at that. Any physical contact would amplify my voraciousness, and prod at my distracted beast.

A shiver coursed through her frame, chattering her teeth, and sending her shoulders into a rattle. She hugged herself, rubbing her triceps with stiff fingers. And, with a perplexed eye she glanced at me. “You don’t notice that?” she asked.

I raised an eyebrow, ignoring my portfolio thereupon the walls.

“It’s so cold in here,” she said with a nervous laugh.

We looked at each other for a moment, as a siren traversed the walls from the near street. It whined in a rhythm, until the sounds of my city apartment reemerged: the occasional homeless man yelling, the honking of horns, and the muffled percussion of music just beyond my ceiling.

But then Gene finally looked about the walls. “Wow,” she said.

I crossed my arms, standing a safe distance away.

“There’s not a trace of red anywhere.”