A Night Out by Christina Mentzer 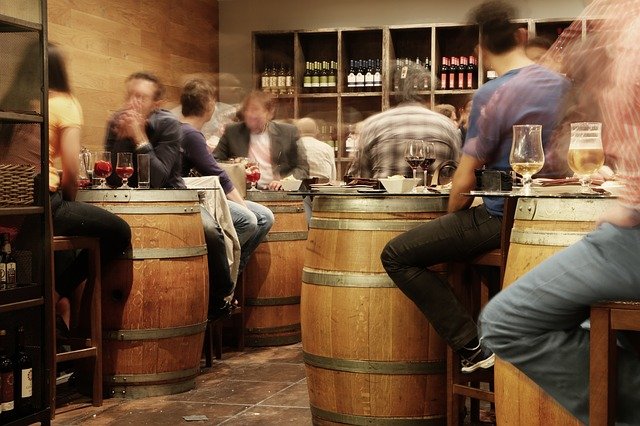 A Night Out by Christina Mentzer

Janice opened the heavy oak wood door. A mix of voices and Jazz music welcomed her. She inhaled the smoke of uncountable cigarettes that floated the room like thick clouds of haze. The warm, stuffy air felt heavy in her burning lungs. She had run all the way as fast as she could. It was a cold night out there and the air she breathed in while running there had felt like knifes.

The skin on her arms, legs and face began to feel like billions of needles and pins, her feet in slippery black ballet flats were freezing. Janice opened her dark red wool coat and slowly made her way through the crowd of strangers towards the bar. She was gasping for air, fast and deep. Could they hear it? Almost like a goldfish that had made its way out off its fishbowl, fighting for its existence on the carpet of a living room, all she could think of was her need to breathe. She felt weak. Was ist from the shock, or was it from running all the way? She did not know.

Two men in white uniforms were handling glasses and bottles in an almost artistic manner. She raised her hand and managed a smile when one of the two bartender noticed her, “Young lady?”

“Gin, please.”. Twenty seconds later, the glass stood in front of her. She stared at the clear liquid for a few seconds, which looked so promising. It would blanken her mind. She drank it all at once, then ordered another glass. The bitter, sharp liquid passed her throat and she could feel a tear running down her right cheek. The wooden floor began to feel soft under her feet. No one in this cheerful, electric atmosphere took notice of her. She felt numb.

A woman with black curls and huge eyes that had the color of dark chocolate stood next to her at the bar and laughed hysterically over something a young man had whispered to her ear. She had a mesmerizing face and moved like a cat. Janice felt small and ordered another glass of Gin. She took the glass and walked away from the bar to stand in a corner on the other side of the room. Tumbling, she somehow made her way. A man with glassy eyes looked at her and said something she could not understand. For a minute, Janice felt like an insecure teenager again. Then she finally reached the safe harbor of the spot in the narrow corner she had been longing for. Leaning against the cold, rough surface of the wall, she began to enjoy the alcohol that began to do its job. It wiped out negative thoughts. It made her forget the shock. It made her feel heavy and muzzy, and at the same time oddly blissful. The pictures from earlier tonight were erased from her mind. A woman in a beautiful green dress blew the smoke of her cigarette to a man´s face. She gave him a look that made him immediately lift his hands in an apologetic manner and walk off. Mrs Green Dress´ friend looked after the man, full of disgust. Then both laughed, shaking their heads. Janice smiled and nipped some more Gin.

All of the sudden, between the smell of cigarettes, alcohol and strangers there was a familiar scent. His aftershave. No. This was impossible. There was no way it could be him. Janice had seen him. She had seen the blood. Everything she had tried so desperately to forget appeared in front of her eyes again. Pictures she would have never wanted to have seen. It was all back.

An acidic, rancid taste filled her mouth. She wrapped her coat tight around herself, shrugged her arms and wanted to escape. Thoughts were speeding through her mind. Her neurons were firing pictures of short memory sequences through her brain. His warm hand on her shoulder. Bruises all over her body. A blood-soaked white shirt. A broken mirror. The color red. A heavy knife. Pieces of broken glass.

She felt sick and exhausted. The temperature in the bar seemed to have dropped dramatically. Fresh air. All she needed was fresh air. Janice was just about to run towards the door, when a shadow appeared in front of her. She froze.